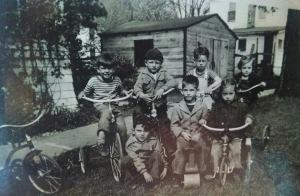 Growing up, I knew everyone in the village. And I was related to more than half somehow or another. I knew every “family” home in the village. There was at least one on every street. The house my grandma grew up in always got the “comment” every time we drove by. She would make my grandpa or mom (she didn’t drive, her legs were too short) slow down to a crawl so she could inspect and comment. “I like what they’ve done with the shutters” or “Why would they take out that shrub? It was a perfectly good shurb…I remember when Charlie planted it”. Mom would commiserate, grandpa would mutter under his breath “Jesus Christ Irene”…one of his all time favorite expressions. 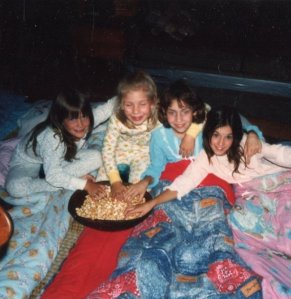 I lived in a 6 block radius from my grandparents and my great grandma lived right across our back yard (in her own home…she wasn’t homeless  or anything). I used to wander over there a few times a day. She was in her 90’s and didn’t do much except sit on the porch rocking during the day or watch Lawrence Welk at night. She had a pear tree in the back yard and grandpa grew grapes for wine, and kept a garden for her. She was almost totally deaf so I had to yell to get her to hear me. I was like 7, so yelling was no big deal for me. Mostly we sat in silence unless she was telling me about who else came to visit her that day. “Frieda stopped by with some canned tomatoes.” “Mabel and Gene were here yesterday.” “Freddy Sindenfoof came over to check on me because I hadn’t opened my shades yet today.” It was nice to just sit and watch the occasional car drive by. 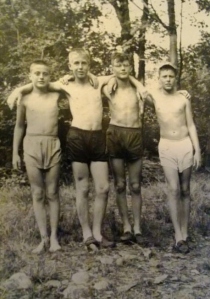 Between my grandparents and my parents, they had the entire village covered. Who belonged to who’s family, who were cousins, who got married, who had babies, who the babies were named after and who in the village was new. There were so many names of families…but the one name that would always send grandma through the roof was Schmitt. Grandpa would go every day to have lunch with his mother (great grandma) AFTER he had lunch with us. Yup, two lunches a day just to keep the two women in his life happy cause when they had to be together, they were not happy. And then he would go up to Schmitt’s house to sit on lawn chairs on the front porch and shoot the breeze. Schmitt was blind,but they would tinker around with small engines and whatever all else old men putter around with. It would drive my grandma wild! She would say “where are you headed to now Wig?” with that tone in her voice (I bet you can hear the tone…that we’ve-been-married-almost-50-years-tone) and he’d say “Schmitt’s” and she would say “Schmitt Schmitt Schmitt it’s always Schmitt!!!” and off he would go. And grandma would vent about how much time grandpa spent with Schmitt.

I liked Schmitt. I wasn’t allowed up to his house much. And he very rarely came down to grandma and grandpa’s. But he was a good guy as far as I could tell. Arlene, grandma’s across the street neighbor, was pretty strict about us roller skating in her driveway. And if grandma left the porch light on past 10pm, Arlene would call to remind her. She had 3 grown kids who would come by every so often. Bobby drove a huge pick up and was always loud and funny, Jimmy was much younger and kinda cute, drove a trans-am like The Dukes of Hazard, and her daughter only came around when she was in need. No one really talked about her daughter.

Uncle Norm, my grandpa’s brother and my grandpa would take bikes that kids threw out to the curb for the garbage man and rebuild them and give them away to kids who needed them. They were always souping up my bike with banana seats, and horns and baskets. I always had the coolest bike around. The neighborhood kids always brought their bikes over for Gramp to fix the chain or pump up the tire or switch out a seat. Famous Bike Repair.

The old families started dying out. Many moving to nursing homes. Not my family. Great grandma died in her home, grandpa died snow blowing Arlene’s driveway and grandma fell and broke her hip and would have died at home if given the chance. Uncle Gene lived to be 101 in his own home, then went to the hospital nursing home wing where my mother could visit every day. Aunt Jesse was the only one I knew to go to a nursing home. It was her choice. 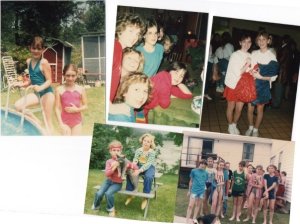 I had my own list of families I knew. The Mussi’s, The Kirts’s, The Michelski’s, The Bollenbacher’s, The Herrgessel’s, The Gammon’s, The Bonus’s, The Benthin’s, The Merrit’s. Those were the kids I played with. All of us village kids. Most of us 2nd if not 3rd generation village kids. The times they were a-changin…but it was still a small village. We would have parades and put on circuses, and explore the spaces in-between our houses. It was fun. But the village did begin to change.

It began to grow, they developed the parks that were the center of the village, traffic began to increase greatly as the developments beyond the village began to grow. People were now living in Syracuse but working in Radisson or Clay and went through my little village. The greyhound bus station opened about a mile away. I thought then that is the end of this little village as I knew it. And it was. Now it is me who slows down when I drive through the village. I see what they have done with my house, with my grandma’s house, my great grandma’s house, my first sunday school teacher’s house, Jane Franklin’s house (spent many a sunny Saturdays at her kitchen table with her sister Nelly who was the woman the character Blanche Deveroe from Golden Girls is based on) They were always slightly drunk on cocktails and funny as hell. I check out Tammy’s house and Becca’s house and Maria’s house and Suzie’s house.

And I say to my kids “That’s where your grandma grew up, and that’s where your great grandma grew up and that’s where your great great grandma lived.” And I know they don’t give a flying fig about any of it. They are just people in pictures and stories I tell about a time they can’t imagine.I show them Maria’s house and tell them how she was the youngest of 10 kids. I show them Lee Anne’s house, her parents were real, true hippies, I show them Tammy’s house and how she lived above a business just like I did. They don’t care much. But someday, if I stay the course, they will have their own stories about the families here in this little village where we live now.   A village my father’s family helped to found on the other side of the city. And when I would drive around with my dad, he would point out which cousin or aunt or uncle lived where. And who else of the old families lived where. So, I pass that on to my kids. I actually live 3 houses down from my second cousin. I know which house my grandma grew up in, and the 3 houses her sisters lived in. Aunt Pearl’s house is my favorite memory. I could walk through it today blindfolded if they haven’t changed the interior.

I cannot escape my family tree as long as I live here, and I don’t want to anyway. I think it is a good gift to give to my kids, to make them feel the connection between their life and the place we live. Our roots are here. And I used to hate that about my family. I wanted to be able to pack up and move. I wanted to travel when I was a child. But that is not what my family did. We did not move. We bought a home and lived in till death do us part. We lived near to our elderly family members so that we can take care of them when they need us. That is what I was raised to do.

I had Pauly and Becca and Tammy and Brookey and Leeanna…my kids have Orson, and Michael, and Rae and Logan and The Other Maeve. I had Old Rose. They have Miss Dot who is herself a great great grandma already. I had Arlene they have Mrs. Duval who will also call to tell me to turn out my lights and that she likes my flowers. For me, looking back it was a wonderful way to be a child. With all those people around who loved me. And now that pattern is repeating for my kids. Every kid my child mentions, I ask what their last name is and where they live. And they know and I generally know the parents. For me, the good outweighs the bad when it comes to living in a small village. My daughters will graduate with the same kids they went to nursery school with.

We are the Village People..so give a wave when you see me in my full head dress…it’s all good they know me around here….. 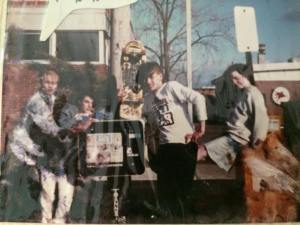