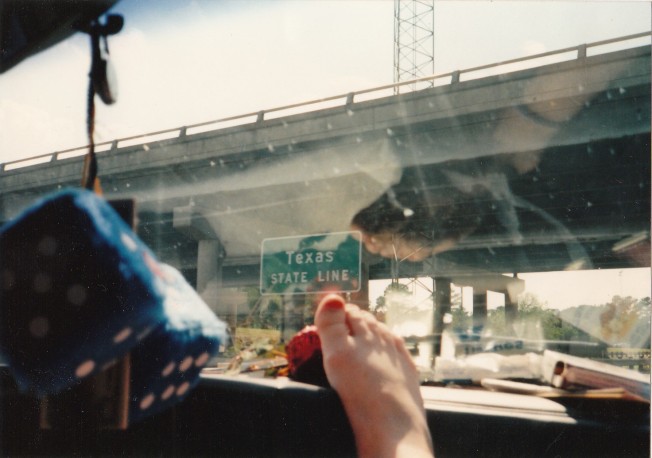 When I was 17, I was living with my best friend in Houston, Texas. That sentence is all sorts of a bad idea. Who’s parent lets their 17-year-old daughter move half way across the country with her best friend? Mine. Because when they realized they were only having one child, they read Dr. Spock’s chapter in his famous book and it said the most important thing to know about raising an only child is to NOT over protect them. My parents took that to heart. There was no over protection happening in my house!!

Anyway, I decided to audition for a few local dance companies. I was pretty homesick and I knew that I would find home once I was back in a studio. I jumped into the South By South West Jazz Ballet Company (The Unofficial U.S.O.). Fun little company. And it was like being home. Any dancer will tell you that they can walk into any dance class in the world and be home. Not that they make you cookies or wipe your nose or hold you when you cry. But the feelings of inadequacy, frustration, and despair feel like home….I’m kidding!!! It’s something about the structure, or the movements, or knowing what’s expected of you that can give  a sense of peace.

The Gulf War had just broken out, and being this company was the Unofficial U.S.O. we immediately started working on some patriotic pieces to tour with. We had a trip planed to Saudi Arabia (which was cancelled because of the escalating violence and the speed in which the war was taking off). In rehearsal for these pieces, I injured my toe. I was doing this great grande jete, and I landed on the middle toe of my right foot. It was swollen immediately and one of the boys had to drive me home. We were laughing and crying all the way home cause it really was funny, but it really did hurt.

I got home and iced it and kept it elevated. But by about midnight it was still throbbing, so I talked my roommate into driving me to the ER. Now, here we are a couple of young girls, in Houston, at midnight, looking for a hospital. We had a general idea of where the hospital was. There was a whole section of the city that was just hospitals. We find one and go on in. There was no one around. Strange. So, we hop on the elevator. Now I am still limping and we are kind of laughing at me limping. A doctor gets on the elevator with us and we ask her which way the emergency room is. She kind of paused, looked us over, smiled in a “poor stupid kids” kind of way and then explained to us that we were in a psychiatric hospital and they didn’t have an ER and unless the voices in my head told me my toe was broken in which case they could admit me.

That sent us into buckets of giggles. She eventually pointed us in the right direction for the hospital that could help me and my toe. We arrived and sat in the ER for about 5 hours amongst gun shot victims, old men having heart attacks, little kids puking and one lady giving birth. It was way better than tv!! I was finally put into a curtained cubicle to wait another 2 hours. Lucky for me my friend was resigned at this point to making the best out of our little excursion and we had all sorts of fun. Stealing gigantic Q-tips and tounge depressors and blowing up rubber gloves. Yeah, stick a couple of teenagers in a ER for 7 hours and watch the fun!!

The doctor finally comes in and looks at my foot. He was from another country so I had a hard time understanding him over all the wailing and screaming coming from the waiting room area. Anyway, he starts examining my big toe. Big toe, the first toe on my right foot. NOT the toe I injured. I injured my middle toe. But hey, what do I know. He’s the Doc. He finally bends it and asks if it hurts. I said “no, but that’s not the one I injured”. He looks at me like I was nuts as he had just spent minutes examining a perfectly fine toe. I point to the middle toe and explain that is the one I injured. He checks it out, determines that it is most likely broken and tapes it to my other toes. He re-examines my big toe again and then looks at me with total seriousness and says “This one isn’t broken?” I said no. “He said “was it ever broken?” I said no. He said “it’s the biggest big toe I have ever seen….” and with that he left. My friend and I lost it!! We had been up all night, getting chased out of mental hospitals and watching people die and give birth and this doctor has the nerve to insult my big toe!! It was just too much!! And to this day I have a complex about the size of my big toe.

I was back to dancing (in pain) within the week. My middle toe healed but my big toe never quite got over the slight from the doctor. I can’t complain because it has served me well over these 37 years. I have grown fond of it. I think it looks like a short, fat bald guy. Both of my big toes look like short, fat, bald guys. Maybe I should have stayed at the psych hospital….